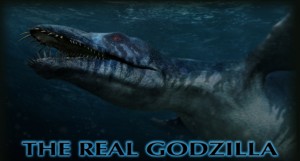 A few of Pliosaur’s incredible stats:

• The greatest predator that ever lived . . . on land or in the sea

• Continued to grow throughout their lives––the older they got, the bigger they grew

• Grew to the length of an adult sperm whale, or possibly bigger

• Possessed massive teeth up to 17.5 inches

• Swam with four, 10 ft paddle fins that spanned about 35 feet from fin tip to fin tip

To Find Out How Large These Giants Grew To