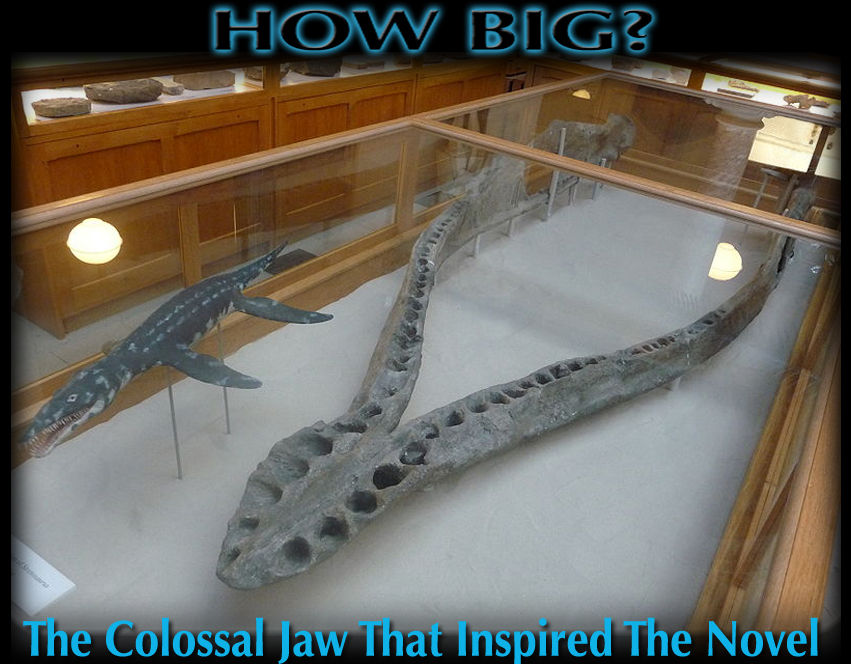 This enormous partial pliosaur lower mandible residing in the Oxford University Museum measures 9.4 feet. If complete the jaw was believed to have exceed 3 meters, or around 10 feet in length. In life, the creature’s head would have been about twelve feet long. Near-complete pliosaur skeletons indicate that the skull was about 17% of total body length, suggesting that the whole animal might have approached 18 m, or nearly 60 feet. Note: The jaw has been assigned and reassigned to  numerous species of pliosaur.

I must say that the photograph of this jaw does not let you appreciate its true scale. To see this mandible in person simply takes your breath away. It is difficult to believe that it came from a living creature. One can’t help but imagine the missing upper jaw placed on top of it, and the gigantic teeth protuding outward and interlocking with one another. Then to invision a head larger than a Lincon Town Car materializing around the jaws. And it was this very experience that helped inspire Vengeance From The Deep. 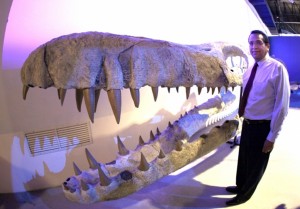 Above is an early reconstruction of a giant pliosaur fossil remains unearthed in Amberri Nuevo León, Mexico,  in 1985.

The estimated length of the entire creature is believed to be in the 40 – 50 foot range.  NOTE: The length and diameter of some of the anterior teeth compared to the gentleman’s arm. 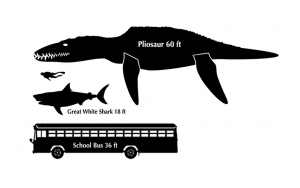 This Kronosaur skeleton (a large genus of pliosaur from the Late Cretaceous), is on display at the Museum of Comparative Zoology, Harvard University. Constructed in 1932, the 43-foot-long reconstruction is now believed to contain a few too many back verterbra, while the neck is thought to be a bit too shortt. 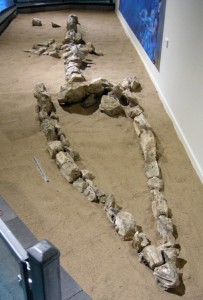 A partial pliosaur skeleton showing the lower outline of its skull, preceding part of a front limb and a few of its vertebrae. Specimen on display at Kronosaurus Korner, Richmond, Queensland.

A reconstruction of one of the  paddles of a giant pliosaur from the Upper Jurassic of Mexico, on display  at the Staatliches Museum. 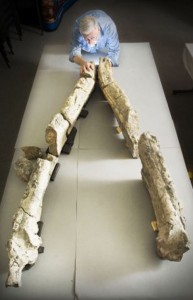 Lower mandible of an 7.9-foot-long pliosaur skull at the U.K.’s Dorset County Museum. 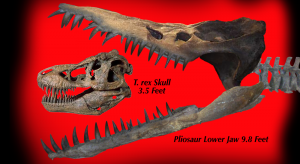 Note: The upper jaw used in this illistration was scaled up to match the 10 foot lower jaw from the Oxford University Museum, which is the largest pliosaur mandible on record. It is believed that in life, the creature’s head would have been around twelve feet long. No complete skull this size has been unearthed, but the partial lower jaw at the Oxford University Museum proves that the head grew to this size . . . if not bigger.

A life-sized reconstruction of a 50 foot pliosaur.
Note that pliosaur still exceeded this length by at least ten feet.

To Find Out About Pliosaur’s Incredible Bite Force