AN ANCIENT SHIP LOST AT SEA

In 1852, a whaling vessel killed a bizarre creature the length of a whale. . . but it was no whale. Soon after, the ship went missing, along with any evidence of their find. Was the encounter true, or merely a legend? The public could only wonder as newspapers of the day spread the story across Europe. A mystery that would go on to haunt and taunt cryptozoologist through the ages

Archeologist John Paxton has always been eluded by the great find. But his luck is about to change on a mysterious island near South Africa. An island that holds the deadly secret behind the ancient ship’s disappearance.

But the riddle of the ship is soon eclipsed by what John uncovers next. He encounters a lost civilization with a plan straight from hell. Within the caverns beneath the island, the tribe worships and nurtures a prehistoric marine reptile that could engulf T. rex. The size of a sperm whale, and equipped with ten-foot jaws bristling with eighteen-inch teeth, this pliosaur is the last remaining member of the greatest predator species that ever lived. Only then does John realize the islanders’ true agenda―to unleash the leviathan on the modern world to fulfill their bloodlust for revenge.

Now John finds himself in a desperate hunt to stop the fifty-ton killing machine before the Ivory Coast washes blood red. A suicidal mission that will take him to the deep-sea floor, and face-to-face with the deadliest predator of all time. 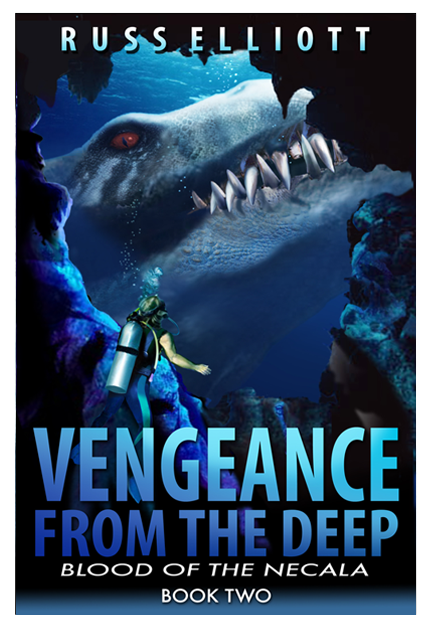 Part two in the two-book series –

While one archeologist has escaped the small island of vengeful tribesmen, a leviathan too has escaped the island . . . the deadliest prehistoric sea creature ever known: pliosaurus, powerful and unstoppable in its purpose.

Just three days since John Paxton narrowly escapes “island hell,” he returns to South Africa to face the creature’s bloody swath of destruction. Assisted by savvy pilot Kate, John scours the ocean waters, obsessed with ending the reign of terror he believes he has unleashed by taunting the island’s status quo.

But the attacks are forming a pattern—a chilling parallel with a prophecy foretold by the island’s tribal elders. All the while, John is unaware that he has been followed by tribal elder Kota, who will stop at nothing to see the bloody prophecy fulfilled.

Now, both hunter and prey, John is hot on the trail of the most lethal set of jaws in history. But when a plan that should have killed the leviathan fails, John faces the ultimate question. Is he battling a mortal creature or, as the villagers prophesied, something more than flesh and bone
. . . an avenging spirit spawned from the abyss
. . . a vengeance from the deep?